Everyone loves gameday, especially in our state. From tailgates to touchdowns, Saturdays in the fall are some of the best days of the year.

Even so, gamedays do not come without their fair share of frustrations. Whether your team blows a big play, the weather does not cooperate or the traffic makes you late, there are plenty of ways gameday can be frustrating. Wins and losses aside, fans of opposing teams can all agree on one thing: there’s nothing worse than gameday parking.

This frustration led Knight Eady Co-Founder and President of Marketing Michael Eady to wonder about a potential solution. A graduate of the University of Alabama, Michael has experienced parking from both sides of the equation – formerly as a student standing on the street with a cardboard sign, and now as a fan returning to Tuscaloosa without a season parking pass.

Knight Eady entered the scene about a year ago when the company leadership came to Katie Jernigan, Kelsey Murphy and me with his idea, and we quickly decided to take on this challenge. We held countless brainstorming sessions asking ourselves questions like: Is there a real need for a gameday parking solution? How can we improve the gameday experience from start to finish? Is there a market for this service outside of our state? How could we pull this off on a large scale?

After doing intensive market research, traveling to Tuscaloosa to speak to our potential target audience and pitching our idea to local business leaders for feedback, we received validation to move forward with this idea. As a company who solves problems in sports, we had discovered an inefficiency in the gameday experience and felt compelled to take on the challenge.

Two Heads Prove Better Than One

As we prepared for a 2018 entry to the market, we encountered several players who would be key to our eventual launch. Through an article published online, we learned of another group in the area working on the same idea. At first, we thought to ourselves, how had someone beat us to the punch? What are the chances that someone else could be working on the same project at the same time as us? Did we miss our opportunity?

Eventually, however, we realized a second company in the market meant three (mostly positive) things. First, our idea was validated. Second, this could be a chance to partner with a team who had an upper hand on the technology side. Third, we needed to move quickly.

Several conversations at El Barrio later, we knew this group would be a great asset to our existing team. At this time, Hunter Strickler, formerly President at local tech startup Visify, and close friend of Knight Eady entered the scene as Clutch!’s official CEO. The two groups combined to form what is now Clutch!, with Hunter serving as the leader of the company.

Ready for Launch: Clutch! In Tuscaloosa and Beyond

Think of Clutch! as the Airbnb of gameday parking. Sellers with open space around event venues and stadiums can list their spots on the Clutch! app, determining price and added amenities, as well as check-in and departure times. Fans coming to an event or a big game can reserve parking in advance through the app, without worrying about having cash or wasting time on gameday. Sellers and fans can list and reserve spots for one game or for the entire season.

For its initial launch, Clutch! started by offering parking for Birmingham Barons games and is now available as a parking solution for all 2018 home football games at both the University of Alabama and Auburn University. Spaces are currently available in the Clutch! app for parking and tailgating at both schools less than 1 mile from the stadiums. In the seasons to come, Clutch! has plans to expand to more campuses regionally and nationally, as well as into non-sporting events where parking demand is at a premium.

Get Your Gameday Back with Clutch!

While Clutch! is now a separate company from Knight Eady, we are still proud to serve this rapidly-growing brand as their creative and marketing agency. Currently, Molly Oretsky serves as the account lead for all things Clutch!. Molly is supported by Buddy Overstreet, Thomas Coiner, David Sikes and Lindsey McMahon on the creative team, as well as Katie Jernigan, Kelsey Murphy and myself on the communications and account strategy side.

If you’re traveling to gameday this fall in Tuscaloosa or Auburn, be sure to download the Clutch! app and reserve your parking in advance! If you have any questions about how the app works or ways you can get involved, send someone on the Knight Eady team a message. This football season, get your gameday back with Clutch!. 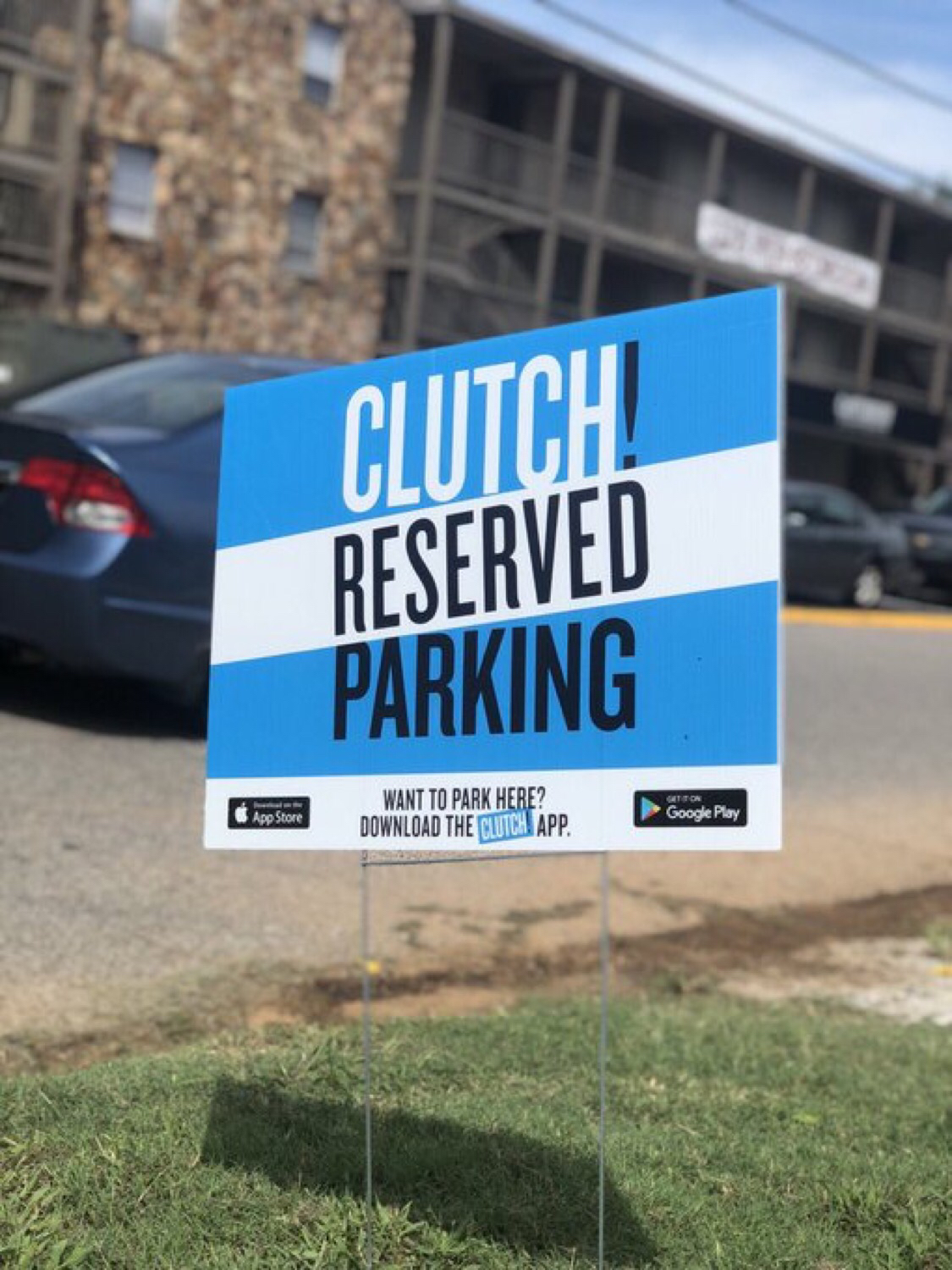