Just two months ago, the Clutch! app – also known as the gameday parking marketplace enabling sports fans to rent privately held spaces – officially launched at Alabama’s home opener against Arkansas State. With a small team of the Clutch! staff and a few campus ambassadors, Clutch! sold 117 spots in its debut, shattering our expectations.

Hundreds of spots, three new universities and some Crimson Tide Rewind interviews later, the Clutch! team is excited by the response the app has received. The gameday parking app has continued to grow, selling close to 200 spots during the most recent weekend of Alabama and Auburn home games.

Despite all of our preparation, we never could have predicted how Clutch! would perform once gameday arrived. Alabama football (Strickler’s alma mater) has seen a perfect record this football season, and Strickler believes Clutch!’s performance comes pretty close as well.

“We launched in Tuscaloosa, and the response there has exceeded our expectations,” Strickler said. “We’ve had a lot of positive feedback from people saying that they’ve been waiting for an app like this for years. We’re excited to play a part in building a better fan experience starting from the moment fans arrive on campus.”

While Clutch! plans to continue expansion to universities across the country, the app is also exploring new and innovative opportunities to revolutionize the parking process at non-sporting events, as Strickler said in his recent profile in the Birmingham Business Journal.

“Clutch! is expanding not only to other SEC campuses, but also to other events locally and around the state,” Strickler said. “We’ve done a concert at Regions Field, and we want to do more festivals and non-sporting events. Anywhere where parking is at a premium and demand outstrips supply, our product has application.” 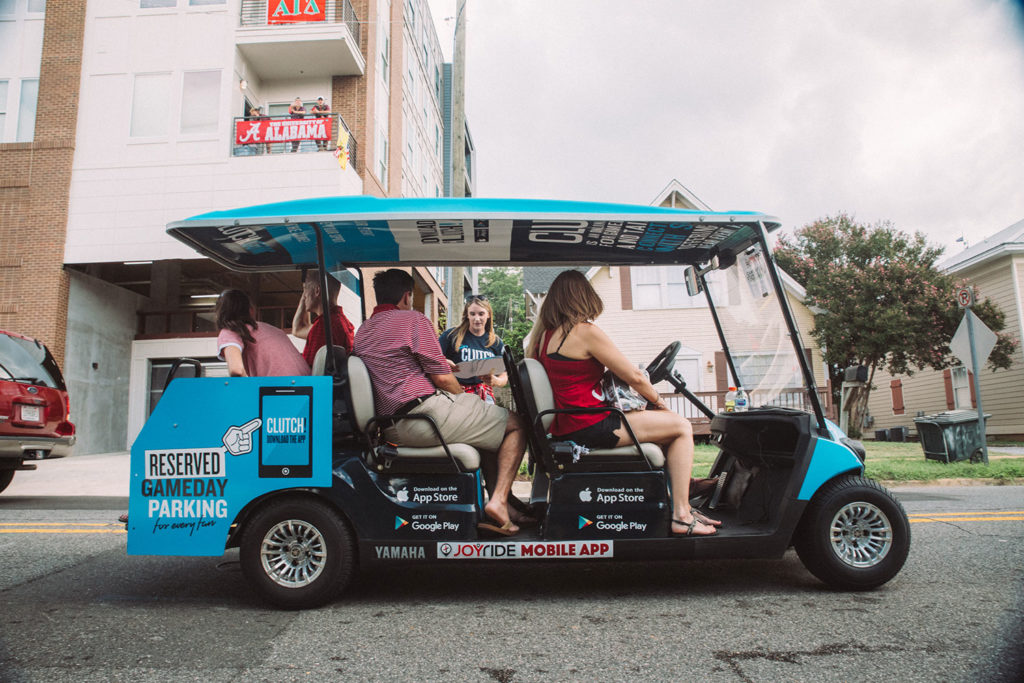 Strickler is thrilled with Clutch!’s gameday parking success, but his passion lies in making gameday the best it can be from more than a parking perspective. The app’s sellers have already begun to include a variety of gameday experiences with their parking space, offering tailgating, motorcycle parking and golf cart rides to set them apart from other available lots.

“For the bigger picture, we’re not looking to be just another parking app,” Strickler said. “We’re looking at parking as the first problem in the fan experience of gameday that we’re trying to solve, along the full spectrum of issues that technology can help enhance down the road. As we’ve grown in Tuscaloosa and beyond, we’ve really been encouraged by the premium amenities our sellers are making available to fans, from space for tailgating to golf cart rides to the stadium.”

Clutch! will continue to offer parking at select universities for the remainder of the season, including the much anticipated Iron Bowl on Nov. 24. Spots can be reserved anytime from now until kickoff. Clutch! has over 400 spots listed for this weekend’s home games at Alabama and Tennessee, but spots are going fast! If you are headed to Bryant-Denny Stadium or Neyland Stadium tomorrow, download the Clutch! app and reserve your parking now!